Computer monitors are often overlooked by players when building their dream machine. Why? Because they’re focused on the GPU, processor and RAM and how many pixels and polygons they can render each second (FPS). What’s all that power good for if your monitor can only manage 60Hz, 1080p resolutions, a response time of 8ms, poor color reproduction and refresh rates? Don’t get me wrong. There are monitors with these specifications that we’ll often recommend for their value, but today we discuss the features that make up the best gaming monitor. 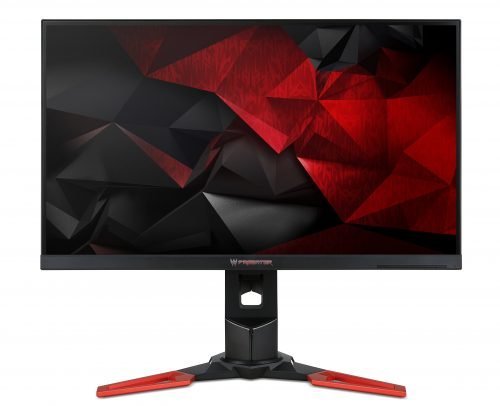 So, what are the features of the best gaming monitors? I mentioned a few of them above – resolution, response time, type of panel, refresh rate, and pixel density. Why not size, you ask? I’ll leave size for you to judge, as size will be the one factor that will influence price independent of the aforementioned features. I highly recommend at least a 22″ monitor for gaming, but lean more heavily on the 24″, 25″ and 27″ monitors. This is where you’ll find the best value by size, and size alone. I’ll take a moment and describe these six key features that the best gaming monitor will have.

Resolution is important for a gaming monitor because it determines the scale and render quality of your game. Most noteworthy, a high resolution creates a sharper image. Additionally, you can fit more on your screen. When playing games like World of Warcraft or Guild Wars 2, a higher resolution allows you to shrink your user interface and see more of the game and environment. In games like Overwatch or League of Legends, it provides clear, sharp visuals that allow you to be more precise with your targeting and clicks.

LED monitor manufacturers have different methods of adding light to the screen. There are currently three common types of LED monitor panels: TN, VA, and IPS. Without going into too much detail, just know that TN panels, or Twisted Nematics panels, are the cheapest to produce and provide rapid response times. Their drawbacks are poor viewing angles that typically manifest as darker shades or hues around the edges of the screen. This is due to the edges being at a slightly wider angle than the center of the screen. Sometimes this is referred to as uneven back-lighting.

VA panels, or Vertical Alignment panels, solve the uneven back-lighting complaint and provide deep blacks, effectively blocking out the back-light almost entirely. Additionally, VA panels resolve the issue of poor viewing angles, providing a broad viewing angle; highly desirable for gamers. However, the major drawback to VA panels is their response time, and to a lesser degree, color reproduction. So for gamers, VA panels are generally not recommended. Most players would rather have poor viewing angles and a fast response time than the inverse.

Lastly, there’s the IPS panel, or In-Plane Switching panel monitors. These monitors are a bit more expensive to manufacture, but provide the most accurate color reproductions. They also have excellent viewing angles. These monitors are preferred by graphic artists and designers, but are also some of the most sought after by gaming enthusiasts. While their response times aren’t quite what TN panels offer, they’re close enough that an IPS-type panel is our recommendation for the best gaming monitor.

Refresh rates refer to how quickly the screen can refresh the image on the screen. Measured in Hertz (Hz), high refresh rate monitors are becoming a very popular in the gaming community. The industry standard for years has been 58Hz – 60Hz, but recently there’s been a wave of interest in 120Hz and higher monitors. The higher the hertz, the more smooth the image appears on the screen. Do you recall the first time you saw a 240Hz high definition image on your television? It looked almost surreal. That’s the effect you want to experience with the best gaming monitor.

Providing a buttery-smooth picture can be the difference between a head shot and a miss. For games like Overwatch, 120Hz and 144Hz monitors are becoming a must in order to stay competitive. In order to achieve these high frequencies, however, you must have a video card capable of drawing the frames as quickly as your monitor. If you have a 144Hz monitor and your video card is only capable of rendering 80 frames per second (FPS), you’re not getting the full benefit of the monitor. Again, synergies between your hardware will help maximize performance at a reasonable cost.

As mentioned previously, this does two things. First, it improves the clarity of the image by reducing the amount of space between pixels. It becomes much more difficult to see the individual pixels on the screen with a high pixel density. Secondly, it increases the amount of usable space on your monitor (provided you’re using its native resolution).

Some users might complain that a monitor’s native resolution makes the text on the screen too small. In this case, most software applications and operating systems will scale images and text by a percentage in order to make things more legible. Know that by scaling your monitor’s image, you can experience a blurry or fuzzy effect on your screen. This is because the scaling can sometimes attempt to enlarge a single native pixel into 4 or more pixels and doesn’t quite handle the scaling well. This is becoming less of a problem with Windows 10 and the macOS El Capitan and later.

Finally, screen size. I left this for last because, believe it or not, it’s the least important. While bigger is generally better, size is the single largest determining factor for price. So if you desire a high quality gaming monitor but only have a budget of $200, you might have to opt for a 21-inch or 22-inch gaming monitor (Read more about cheap gaming monitors). If you’re willing to spend a bit more; say, up to $300, you can likely snag a 24-inch to 25-inch monitor with great features for gaming. To get a 27-inch gaming monitor with the best of the features above, expect to spend $450 or more. Of course, prices of technology continues to fall. So it might be worth holding out for a sale, a new model, or a newly hyped feature to bring a monitor with your specific needs into your price range.

In conclusion, the best gaming monitor will be determined by its variety of specs within the features listed above. Specifically, the most desirable of these features are as follows:

Have a question you don’t see answered? Submit your question(s) using our contact page and we’ll add them to the list.